Our entire office recently attended a talk by author and speaker Dan Pink. The session was an interesting take on operant conditioning in the business world, taken from his bestselling book, Drive: The Surprising Truth about what Motivates Us. After a brief introduction to Pink’s ideas, I want to tell you about what happened in our office after the talk.

Operant conditioning, originally postulated by B.F. Skinner, describes how you can change the frequency and form of behavior by rewarding the behavior that you desire and punishing the behavior that you want to eliminate. Though this is a very simplified view of operant conditioning – as any first year psychology student should be able to tell you – it is the view that seems to dominate the business world; if you do well in your tasks, you get a monetary reward. The problem, as Pink emphasized, is that studies have demonstrated several times that though this paradigm works well for physical tasks, once the tasks require a cognitive workload, monetary rewards have no effect on improving performance.

As counter intuitive as this may seem, most people probably know someone who left a well-paying job to start their own business or to join a non-profit that they believed in or took a less-well paying job to get something “else”. That “else” according to Pink is autonomy, mastery and purpose. To learn more about Pink’s ideas, you can go to his website, or check out this engaging YouTube video. It was actually this video that initiated our interest in Pink and prompted a larger group that we are a part of to invite him to speak in Pittsburgh.

So, what happened at our company after attending Pink’s talk? Two days later, the principals of the company asked us to attend a lunch time meeting to discuss what we’d heard, and asked us to offer ideas about how to implement some of the things that we’d heard or since concluded.

As often happens with our company, we discussed these ideas and concepts in the context of the Edward de Bono’s Six Thinking Hats. 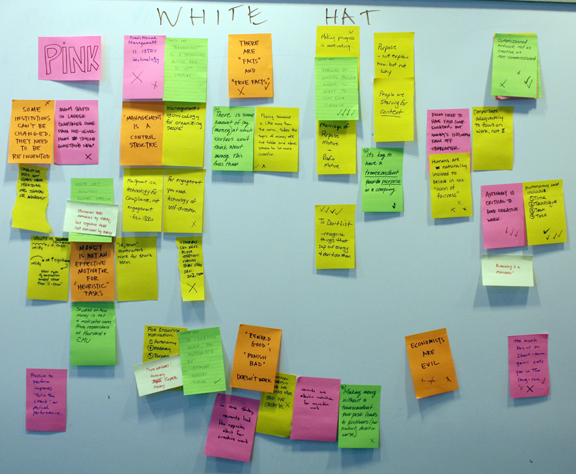 We then moved on to discuss new ideas (Green Hat) that either were developed from the concepts that Pink raised or could be considered counterpoints.

For example, though we were at first attracted to the idea of a vacation policy that allows you to take unlimited vacation whenever you wanted, as Pink indicated some famously successful companies utilize, some of us were concerned that a policy of unlimited vacation could lead to a corporate culture of no vacation — people either not taking vacation or feeling obligated to work during vacations. CNN has recently run articles branding the United States the “no-vacation nation“; Americans don’t take the vacation that they are entitled to — which is far less than many other countries require — and feel the need to stay connected to work even when they are on vacation.

Finally, in our discussion we focused on ways that we might change company policies, to increase motivation. Surprisingly enough, more vacation was not the idea that most people were drawn to. In line with Pink’s motivational concept of “autonomy”, the idea that drew the most support was that of giving people greater freedom in selecting projects to work on.

We were also drawn to the idea of 20% time, in which employees are given the opportunity to work on projects of their own choosing for 20% of the time (or variations of this, such as 10% time, or one day a month, etc). But there were some concerns expressed that 20% time might actually lead to greater amounts of stress given the pressure to deliver unique progress in a very short span of time.

The other popular idea stemmed from Pink’s comment that the American business world is a “freaking feedback desert”. It would appear that many of us agreed with that sentiment, requesting different and increasingly frequent feedback on performance.

Of course, the impact of hearing this talk and discussing further within the office is still to come. So far, the partners have committed to redesigning our review system and will use our summer one-on-ones to get feedback on how to do that. Whether some of the more radical ideas will find a place in our office, particularly, the 10% of 20% time, remains to be seen.

We’ll use this blog as a place to discuss our progress.