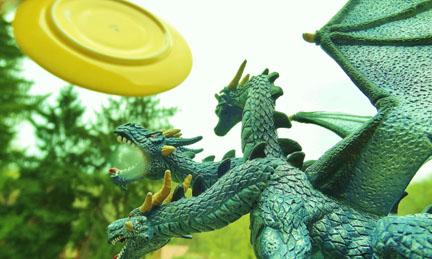 With the thrilling sword and sorcery drama Game of Thrones returning to HBO for a second season, we thought that there was no time like the present to run a little study. We partnered with Cleveland insurance broker Insuranteed to explore how people assess the likelihood of two very hypothetical risks. It was meant to be all in fun, but we might have learned something interesting.

Over a period of three weeks Daedalus researchers posed as Insuranteed brokers and completed telephone pitches for two homeowners insurance policies and a third cost-extra policy. We asked each subject to choose between two policies, which cost the same, and then gave them a final option to select a no-compromises cost-extra policy.

The first fictional policy, Insuranteed Comprehensive, covered all the usual stuff, like fire, flood, etc., but excluded one unusual risk to a person’s home: dragon attack. If your house was attacked by a dragon during the coverage period, you’d find yourself on your own — with no coverage. Although all other kinds of fire would be covered, dragon fire wouldn’t.

The second fictional policy, Insuranteed Complete, was also an otherwise typical policy, but it had a different exclusion: UFO attack. If your home was destroyed or otherwise damaged in a UFO attack, you can call the men in black, but don’t call Insuranteed. Although the homeowners policy included theft coverage, if that theft was at the suction-cup covered hands of a bulbous-headed green alien, no check for you.

Our researchers are experienced and well trained, so they delivered the pitches very professionally, and even had ready responses to “you’ve got to be kidding me.” Kind-hearted researcher Jackie was quite uneasy, and was relieved when she reached the reveal at the end and could tell people it was just a study. Carson was a little less able to keep it straight and “broke” a few times, with his laughter rendering those interviews invalid.

But we did get one-hundred people through the two-question survey, and each of them did a followup with us after the reveal. FYI, we swapped the question order and the names of the insurance products, to take out any name or order bias.

The first question was simple; which of the equally priced coverages does the subject prefer? People picked UFO coverage by a little over three to one. The logic was straightforward; dragons don’t exist. One person, quite seriously, said, “dragons don’t exist anymore,” which could simply be confusion between dragons and dinosaurs. A common confusion. One gentleman pointed out that the aliens were already visiting us, but they weren’t interested in wrecking our houses, so he went with the dragon coverage.

And of the majority who opted for the UFO coverage? This is where the Independance Day effect came into play. People who imagined aliens similar to that in the Roland Emmerich film were quick to opt for the UFO coverage. People who held the Steven Spielberg E.T. vision were a little less concerned, but still talked openly about the possibility of an alien invasion. The “exterminate all life and take our resources” scenario led to the most concern, although one man questioned Insuranteed’s viability as an insurer in that situation.

I will admit that somewhere around 25% really didn’t care about the choice and thought it was “weird” or “a joke” that these options were being discussed. But a majority took the decision seriously or at least pretended very convincingly.

Which led us to question two. We offered the prospective insureds the option of paying five dollars a month to cover both dragons and UFOs. No exclusions for either. No hard decisions to make. We figured no or next to no takers, but brace yourself. A whopping eighteen people out of the one-hundred opted to pay an additional five dollars a month for homeowners insurance that added UFOs AND dragons. Three common rationales were “better safe than sorry,” “it’s only five dollars a month,” and also, thoughtfully, “then I won’t have to argue with the insurance company about whether an alien or dragon did it.”

There are some interesting potential explanations for the results of question two. First, it is clear that people are willing to insure against some pretty unlikely things. And we all have different ideas about what is likely and what isn’t. It struck me that people don’t recognize how small monthly fees add up over time. But what really hit home for me is that people have a strong urge to get the “complete package” and will pay disproportionately to close the final gap between what is perceived as incomplete and what is perceived as complete.

Thanks again to the folks at Insuranteed.